I. Mark the letter A, B, C, D on your answer sheet to indicate the word whose underlined part differs from the other three in pronunciation in each of the following questions.

II. Mark the letter A, B, C, D on your answer sheet to indicate the word that differs from the other three in the position of the primary in each of the following questions.

III. Mark the letter A, B, C, D on your answer sheet to indicate the correct answer to each of the following questions.

Question 8: If orders keep coming in like this, I’ll have to ____ more staff.

Question 9: He couldn’t rest or sleep because ____ too much coffee.

Question 10: There is a very clear relationship ____ education and academic success.

Question 11: Everyone should travel; it really ____ the mind.

Question 12: Many people believe that violent computer games can have a harmful ____ on children.

Question 13: Navigation around the globe is a lot simpler thanks to the information we receive from ____. 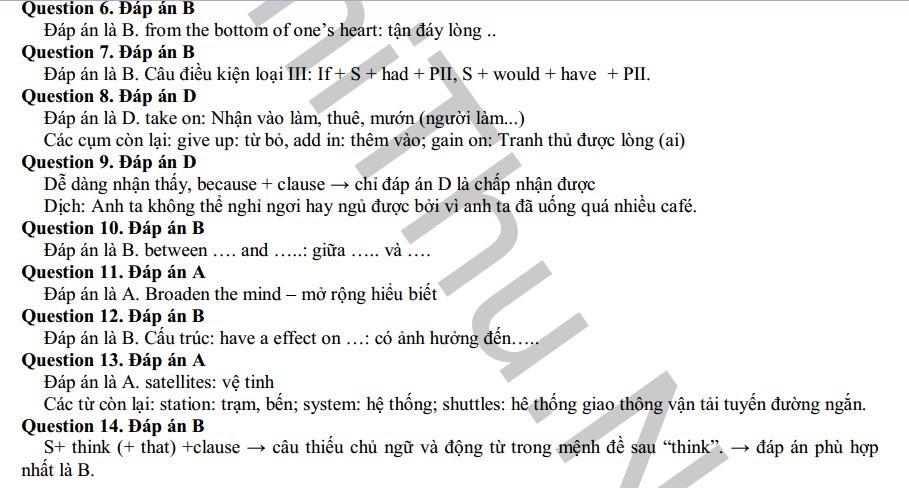 Question 16: Something ____ happened or they would be here by now.

PHẦN TỰ LUẬN : Part II. Complete the second sentence so that it has a similar meaning to the first sentence.

Question65: Students may not park here.

Question66: We’ve written fifty per cent of the report already.

Question68: Amy was bitten by a dog when she was very young and she still remembers it.

Question69: “I shall return the day after tomorrow.”

In about 140 words, write a paragraph about benefits of physical exercises