Question 10: My mother told me to ______ for an electrician when her fan was out of order. 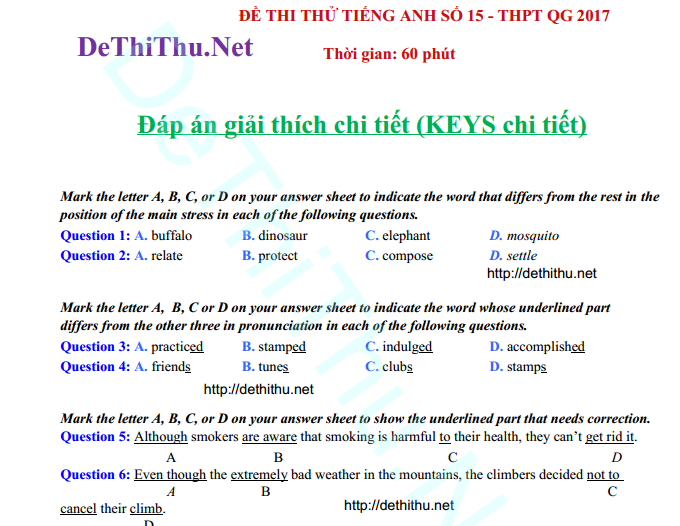 Question 28: The film didn’t come up to my expectations.

Read the following passage and mark the letter A, B, C, or D on your answer sheet to indicate the correct answer to each of the questions from 43 to 50.
Very few people in the modern world obtain their food supply by hunting and gathering in the natural environment surrounding their homes. This method of harvesting from nature’s provision is the oldest known subsistence strategy and has been practised for at least the last two million years. It was, indeed, the only way to obtain food until rudimentary farming and the domestication of wild animals were introduced about 10,000 years ago.
Because hunter-gatherers have fared poorly in comparison with their agricultural cousins, their members have dwindled, and they have been forced to live in marginal environments, such as deserts and arctic wastelands. In higher latitudes, the shorter growing seasons have restricted the availability of plant life. Such conditions have caused a greater dependence on hunting, and on fishing along the coasts and waterways. The abundance of vegetation in the lower latitudes of the tropics, on the other hand, has provided a greater opportunity for gathering a variety of plants. In short, the environmental differences have restricted the diet and have limited possibilities for the development of subsistence societies.

Contemporary hunter-gatherers may help us understand our prehistoric ancestors. We know from the observation of modern hunter-gatherers in both Africa and Alaska that a society based on hunting and gathering must be very mobile. While the entire community camps in a central location, a smaller party  harvests  the  food  within  a  reasonable  distance  from  the  camp.  When  the  food  in  the  area  has become  exhausted,  the  community  moves  on  to  exploit  another  site.  We  also  notice  seasonal migration  patterns  evolving  for  most  hunter-gatherers,  along  with  a  strict  division  of  labor  between the  sexes.  These  patterns  of  behavior  may  be  similar  to  those  practised  by  mankind  during  the Paleolithic Period.

Question 43: The word “domestication” in the first paragraph mostly means ______.
A. hatching and raising new species of wild animals in the home
B. adapting animals to suit a new working environment
C. teaching animals to do a particular job or activity in the home
D. making wild animals used to living with and working for humans

Question 44: According to the passage, subsistence societies depend mainly on ______.

Question 45: In the lower latitudes of the tropics, hunter-gatherers ______.

Question 47: The word “conditions” in the second paragraph refers to ______.
A. the environments where it is not favorable for vegetation to grow
B. the situations in which hunter-gatherers hardly find anything to eat
C. the places where plenty of animals and fish can be found
D. the situations in which hunter-gatherers can grow some crops
Question 48: According to the passage, which of the following is NOT mentioned?
A. The number of hunter-gatherers decreases where farming is convenient.
B. Hunting or fishing develops where there are no or short growing seasons.
C. Harvesting from the natural environment had existed long before farming was taken up.
D. The environmental differences produce no effect on subsistence societies.

Question 49: According to the author, most contemporary and prehistoric hunter-gatherers share ______.

Question 50: Which of the following would serve as the best title of the passage?