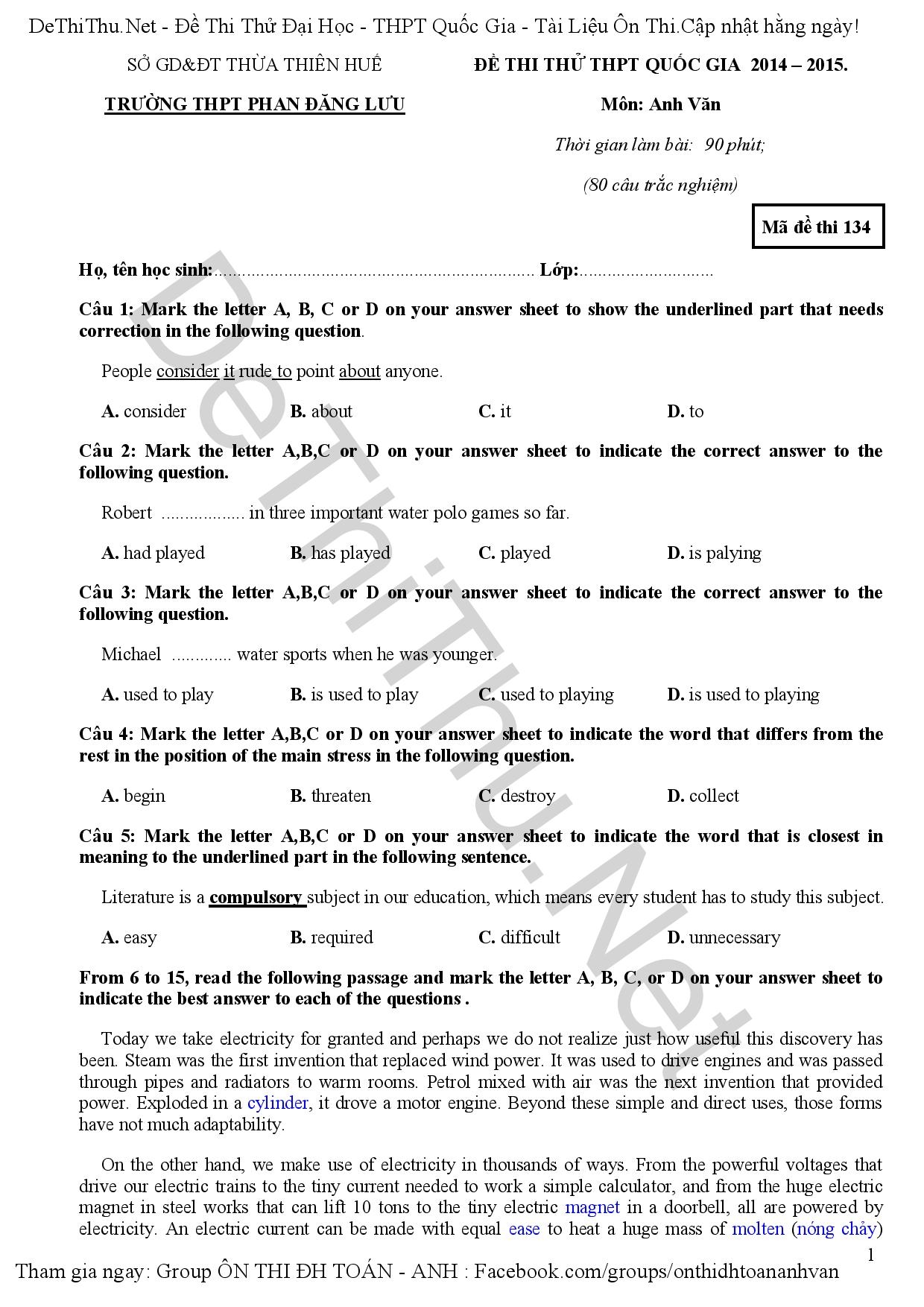 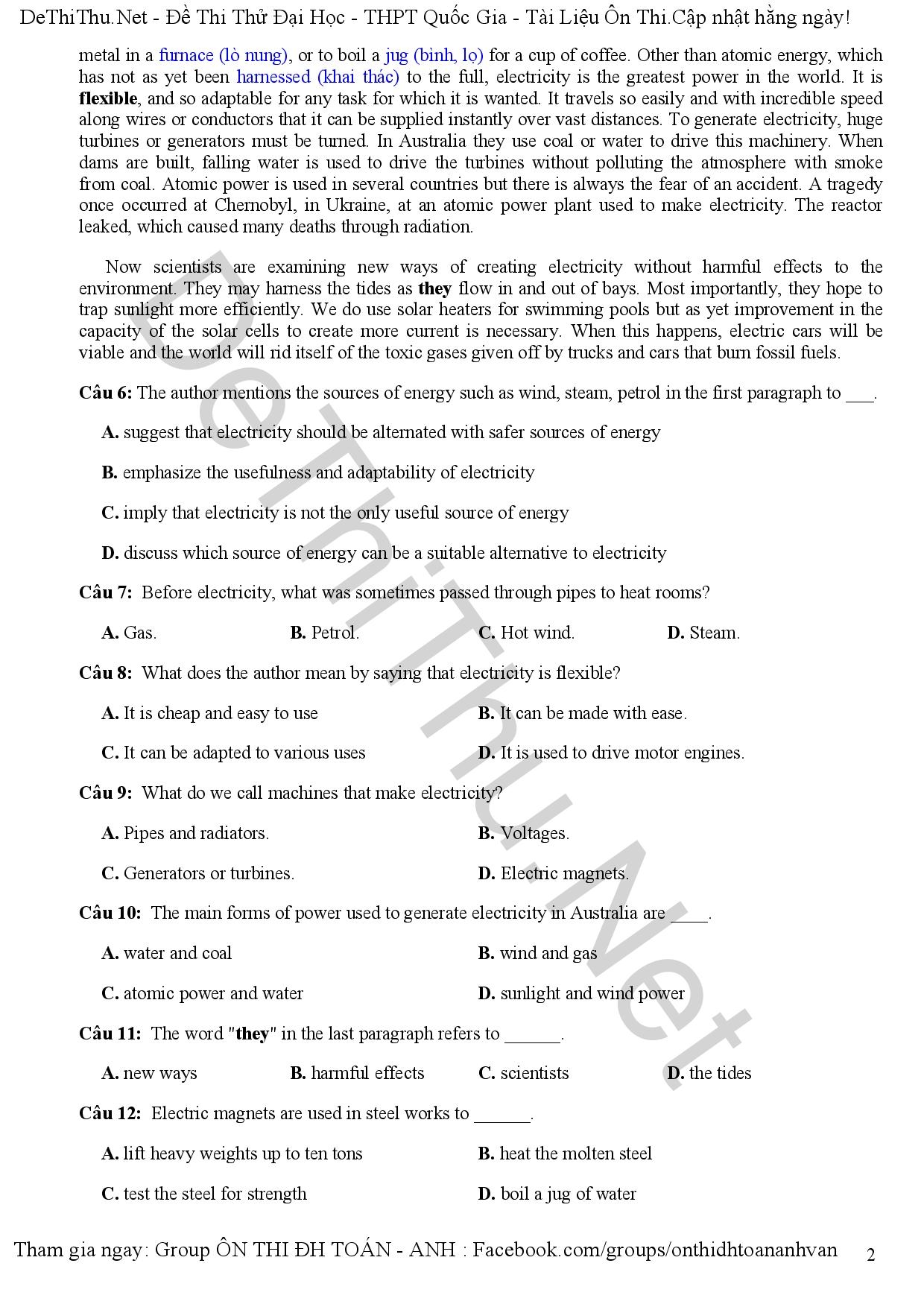 Câu 1: Mark the letter A, B, C or D on your answer sheet to show the underlined part that needs correction in the following question.

People consider it rude to point about anyone.

Câu 2: Mark the letter A,B,C or D on your answer sheet to indicate the correct answer to the following question.

A. had played
B. has played
C. played
D. is palying

Câu 3: Mark the letter A,B,C or D on your answer sheet to indicate the correct answer to the following question.

Michael …………. water sports when he was younger.

Câu 4: Mark the letter A,B,C or D on your answer sheet to indicate the word that differs from the rest in the position of the main stress in the following question.

Câu 5: Mark the letter A,B,C or D on your answer sheet to indicate the word that is closest in meaning to the underlined part in the following sentence.

Literature is a compulsory subject in our education, which means every student has to study this subject.

From 6 to 15, read the following passage and mark the letter A, B, C, or D on your answer sheet to indicate the best answer to each of the questions .

Today we take electricity for granted and perhaps we do not realize just how useful this discovery has been. Steam was the first invention that replaced wind power. It was used to drive engines and was passed through pipes and radiators to warm rooms. Petrol mixed with air was the next invention that provided power. Exploded in a cylinder, it drove a motor engine. Beyond these simple and direct uses, those forms have not much adaptability.

On the other hand, we make use of electricity in thousands of ways. From the powerful voltages that drive our electric trains to the tiny current needed to work a simple calculator, and from the huge electric magnet in steel works that can lift 10 tons to the tiny electric magnet in a doorbell, all are powered by electricity. An electric current can be made with equal ease to heat a huge mass of molten (nóng chảy) metal in a furnace (lò nung), or to boil a jug (bình, lọ) for a cup of coffee. Other than atomic energy, which has not as yet been harnessed (khai thác) to the full, electricity is the greatest power in the world. It is flexible, and so adaptable for any task for which it is wanted. It travels so easily and with incredible speed along wires or conductors that it can be supplied instantly over vast distances. To generate electricity, huge turbines or generators must be turned. In Australia they use coal or water to drive this machinery. When dams are built, falling water is used to drive the turbines without polluting the atmosphere with smoke from coal. Atomic power is used in several countries but there is always the fear of an accident. A tragedy once occurred at Chernobyl, in Ukraine, at an atomic power plant used to make electricity. The reactor leaked, which caused many deaths through radiation.

Now scientists are examining new ways of creating electricity without harmful effects to the environment. They may harness the tides as they flow in and out of bays. Most importantly, they hope to trap sunlight more efficiently. We do use solar heaters for swimming pools but as yet improvement in the capacity of the solar cells to create more current is necessary. When this happens, electric cars will be viable and the world will rid itself of the toxic gases given off by trucks and cars that burn fossil fuels.

Câu 6: The author mentions the sources of energy such as wind, steam, petrol in the first paragraph to ___.

Câu 7: Before electricity, what was sometimes passed through pipes to heat rooms?

Câu 8: What does the author mean by saying that electricity is flexible?

A. It is cheap and easy to use
B. It can be made with ease.
C. It can be adapted to various uses
D. It is used to drive motor engines.

Câu 9: What do we call machines that make electricity?

A. Pipes and radiators.
B. Voltages.
C. Generators or turbines.
D. Electric magnets.

Câu 10: The main forms of power used to generate electricity in Australia are ____.

A. water and coal
B. wind and gas
C. atomic power and water
D. sunlight and wind power

A. lift heavy weights up to ten tons
B. heat the molten steel
C. test the steel for strength
D. boil a jug of water

Câu 13: The advantage of harnessing the power of the tides and of sunlight to generate electricity is that they ______.

A. are more reliable
B. do not require attention
C. do not pollute the environment
D. are more adaptable

Câu 14: Which of the following power sources causes pollution by emitting harmful gases?

A. “Why Electricity Is So Remarkable”
B. “Types of Power Plants”
C. “How to Produce Electricity”
D. “Electricity: Harmful Effects on Our Life”